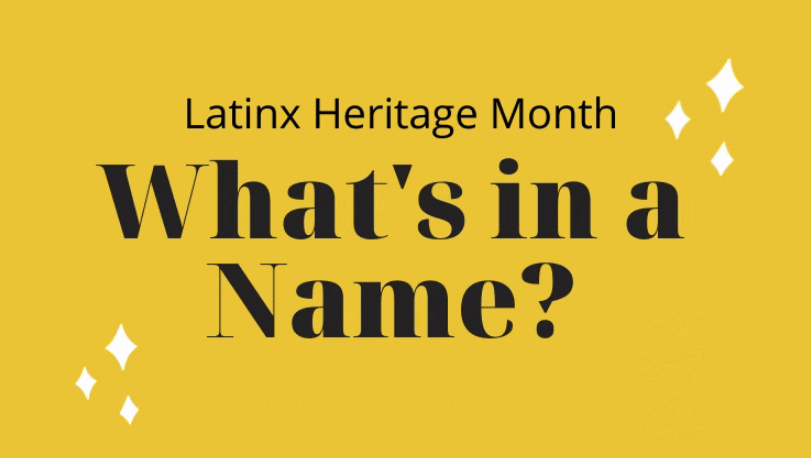 What’s in a Name?

From September 15 to October 15, the United States celebrates and honors Hispanic Heritage Month. This tradition grew out of National Hispanic Heritage Week, which was signed into law by President Lyndon B. Johnson in 1968. In 1988, President Ronald Reagan signed a law extending the observance to the month-long tradition we know today.

But what does it mean to be Hispanic? Where does the term originate? What cultures or ethnicities does it intend to represent? Why was it created? Are there other words used to describe these groups? What about Latino/a/e/x? As a Puerto Rican and a program evaluator, who works with data and demographic information, I find myself questioning what it means to be Hispanic.

The reality is that it’s complicated. Pick ten different people and they will each give you a different answer on how they identify and why. Geographic location, age group, country of origin, and access to education are all relevant and play a part in how Hispanic/Latino/a/x/e folks choose to identify. These terms all attempt to represent the diverse experiences of communities from Latin America and parts of the Caribbean within the context of the United States.

Specifically, Hispanic refers to anyone from Spain or Spanish speaking parts of Latin America and the Caribbean. It celebrates and emphasizes a collective Spaniard heritage; marking Spain as the central European ethnic group in Latin America and parts of the Caribbean, erasing the much more complex and nuanced story of European colonization. Its attempt to include Spaniards fails to recognize that they are white Europeans, who do not experience the marginalization or oppression that often follows Latin American and Caribbean people of color. More importantly, this emphasis erases the collective Indigenous and African heritage evident in most parts of Latin America and the Caribbean. Instead, choosing to celebrate violent and brutal people, like Christopher Columbus, and empires who colonized, murdered, raped, pillaged, and terrorized Afro-Latinos and indigenous people.

Activists in the United States understood the political power of being united under one category. They recognized that it could help shed light on the community’s specific needs, help demand for more resources, and collect necessary data for community support. Lobbying to have a distinct category for people of Latin American descent was a strategic political move by activists in the ’70s and ’80s. According to an article in Remezcla, “for many decades… people of Latin American descent were referred to as their own distinct nationalities. And Mexicans and Puerto Ricans, for example, were categorized as white on the Census. This was a source of frustration for Chicano activists who argued that not having a separate category for people of Latin American descent meant they couldn’t show the government that they had separate needs. Mora’s research shows that activists, particularly the National Council of La Raza – now known as UnidosUS – lobbied the government for a term that would unite these varied groups. The organization was instrumental in uniting Mexicans and Puerto Ricans ‘to hammer out a Hispanic agenda,’ Mora tells Latino USA.”[1]

However, its limitations are evident. One term cannot possibly capture the diversity and the complexity birthed through colonialism. In fact, throughout the years, activists, social scientists, and communities have organically expanded the lexicon to include Latino/a, Latine/x, Afro-Latina/o/x/e as more inclusive ways to self-identify. The term Latino “refers to people from the Spanish and Portuguese-speaking countries of Latin America, but it does not include those from Spain or Portugal. This word, however, typically doesn’t make room for people from Latin America whose countries were not colonized by Spain or Portugal, leaving out Belizeans and Haitians. (There are some people with ties to these countries who do self-identify as Latino.)”[2]

Recently Latinx (in the United States) and Latine (in Latin America and the Caribbean) have been added to represent the experiences of transgender and non-binary people. The integration of “x” and “e” help to mitigate the gender-specific language found in Spanish and other romantic languages. It allows for a letter associated with neither male or female connotations. Although not perfect, the addition of Latino in all its variations (a/e/x) is opening the door to a complex conversation about, race, culture, gender identity, and gender expression often hidden within our respective cultures and nationalities. Their introduction and malleability remind us of the fluidity of language, and the importance of that fluidity.

What is important to remember is that in all variations the central theme of each word is a focus on the European colonizers as the defining common denominator across cultures and nationalities. The words we choose to describe our identities are then often dictated by the colonizers and their language, violently ignoring a shared diverse indigenous and African ancestry. What ties us together is not the European empire that colonized us or the language we inherited from them, but the story of indigenous genocide, enslavement, settler colonialism, imperialism, economic exploitation, Christian supremacy, environmental destruction, and a caste system built on white supremacy. What ties us together is community, joy, liberation, and the stories of resistance, victory, and loss.