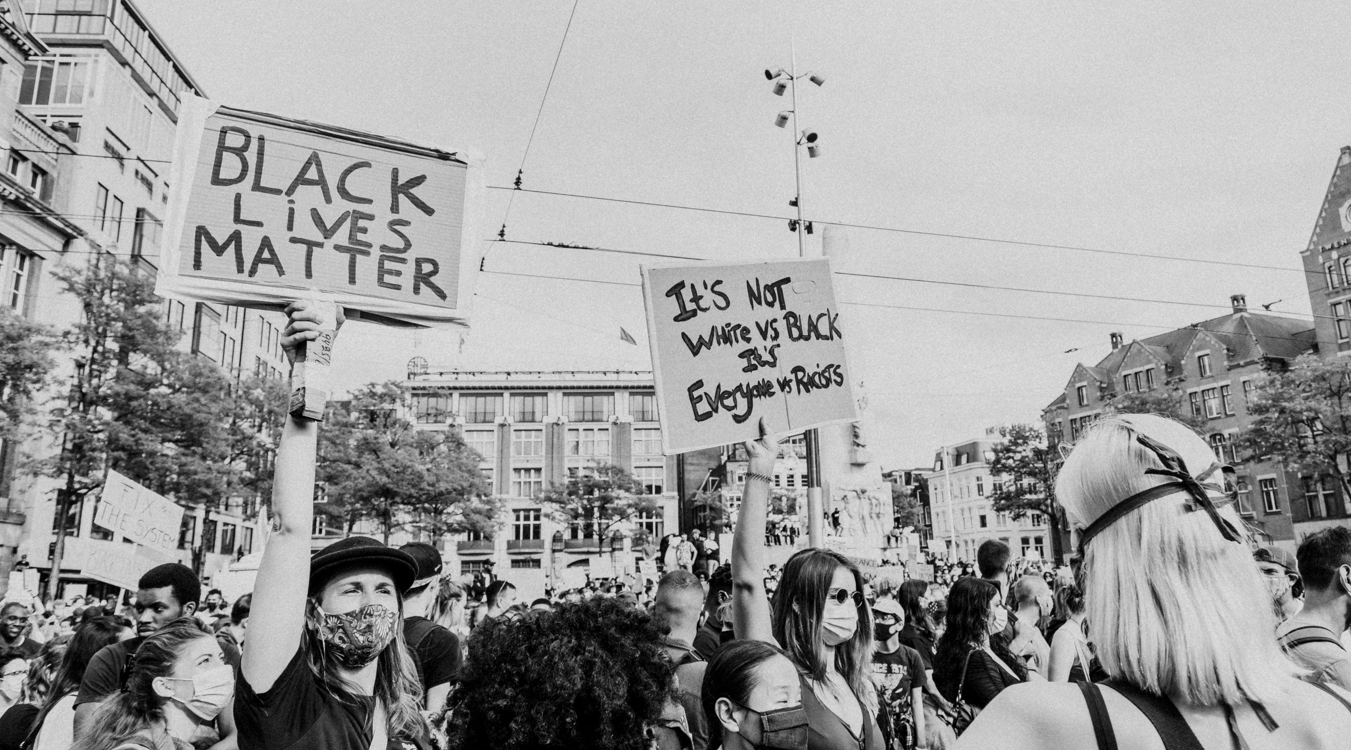 In May, we entered into the 28th annual celebration of our Asian American Pacific Islander (AAPI) community that was set during the backdrop of a global pandemic due to COVID-19, which has stoked further racism in the form of lies, assault, harassment, and hate crimes against the AAPI community. Similarly, the Black community has faced increased racism and harassment for wearing required facemasks in businesses, adding to heightened levels of fear for their safety and wellbeing. The murder of George Floyd by former members of the Minneapolis Police Department in May sparked an uprising against the pillars of systemic racism that prop up American society.  At the core of these pillars is white supremacy; the impacts of which vary based on which group one is racialized into. As protests continue across the world Black, Indigenous, and People of Color (BIPOC) continue to stand together in the fight for Black rights and Black lives, while risking their lives serving on the frontlines of the pandemic. COVID-19 has re-illuminated our inequities and compounded the stress already experienced by communities of color, as they seek to access services and supports integral to their survival and wellness. This racialized reality prompts the necessity to explore the following critical questions:

We realize this is an extremely complex topic that is entrenched in many American systems, and as such this post is meant to be a primer. Therefore, we encourage further learning through the use of the resources provided at the end of the post. In the time of the global pandemic, community is as important as it has ever been, and we at RE∙Center stand with our Black and AAPI community members in solidarity and unity against the racism they have and continue to face at increased levels across America.

Remember:Oppression thrives on isolation.  Connection is the only thing that can save you.
-Yolo Akili (Activist, Writer, Poet, Counselor, and Community Organizer)

When discussing how white supremacy, racism, and anti-Blackness manifest in any community, much less a community of color, it’s important to outright acknowledge that to trace the root of this socialization is to acknowledge that racism and white supremacy exist and permeate into every facet of American society and culture. No one is immune to its reach, and we all have a role that we play in the system, whether explicitly or implicitly, supporting it by our (in)action. It is also important to acknowledge that the forms in which racism and anti-Blackness play out across communities is both wide and deep. It is wide in the scope of its history, changing and morphing from the 17th century to the 21st, and it is deep in the amount of systems it is integrated within (judicial, financial, social, educational…).

The Anti-Defamation League ([ADL], 2020) defines white supremacy as a term used to characterize various belief systems that circulate around the following tenets: “1) whites should have dominance over people of other backgrounds, especially where they may co-exist 2) whites should live by themselves in a whites-only society; 3) white people have their own ‘culture’ that is superior to other cultures; 4) white people are genetically superior to other people”. Conversely, “‘Systemic racism’ or ‘institutional racism’, refers to how ideas of white superiority are captured in everyday thinking at a systems level… these systems can include laws and regulations, but also unquestioned social systems” (O’Dowd, 2020). Bridging the gap between the two, systemic racism assumes white superiority individually, institutionally, and ideologically, and the assumption of superiority can pervade thinking consciously and unconsciously (O’Dowd, 2020). In short, “individuals may not see themselves as racist, but they can still benefit from systems that privilege white faces and voices” (O’Dowd, 2020).

Before we discuss anti-Blackness in the Asian Pacific American community, it is important to distinguish that racial minorities cannot be racist to folx of color, as it goes against the power structure of systemic racism, but can instead engage in prejudiced actions that perpetuate and allow individuals to benefit off of racial power structures that oppress other racial minorities (Mayeda, 2018). Two poignant examples of how white supremacist and anti-Black ideologies play out across communities of color is the Model Minority mythology and colorblind policies, which have more recently played an increasingly visible role within education in the case against Affirmative Action in Harvard undergraduate admissions brought about by the Students for Fair Admissions.

The term model minority “has often been used to refer to a minority group perceived as particularly successful, especially in a manner that contrasts with other minority groups… In particular, the model minority designation is often applied to Asian Americans, who, as a group, are often praised for apparent success across academic, economic, and cultural domains – successes typically offered in contrast to the perceived achievements of other racial groups” (Mayeda, 2018). Though recently coming into common vernacular, the model minority myth has a long history in America, taking root in the post-Civil War era. Asian immigrants seeking work were able to benefit  from the notion that they were more hardworking and obedient than African Americans. Behind the curtain of that notion were plantation owners and white politicians, who, seeing how this mechanism of social control created competition and sowed division, “surmised that a sustainable way of maintaining their hierarchy was to foster other racial hierarchies that conformed to and were microcosmic of white supremacy” (Mayeda, 2018).

The model minority myth is a stereotype that is undermined by its inability to apply symmetrically across those who identify as part of the AAPI community. The AAPI community is nuanced in composition, and though they may be doing well as a whole compared to other racial groups, a closer analysis of data points reveals complexity across multiple dimensions, greatly affected by differing periods of immigration to America. As indicated in the Pew Research Center data there is a great variance of inequality in the AAPI community that widely goes under reported and generally ignored, ranging from education to economic status. The allure of whiteness also breeds colorism both within the AAPI community and between the Black community. Colorism is defined as “prejudice or discrimination against individuals with a darker skin tone, typically among people of the same ethnic or racial group-affects just about every part of the non-white world” (Wakefield, 2020, paras. 5). Within the AAPI community colorism creates divides, as those with a lighter skin tone, closer to Caucasian-ness, are praised for their assimilation to and honoring of whiteness. The proximity to whiteness not only increases the propensity for colorism within the AAPI community, but also motivates individuals in the AAPI community with darker skin tones (i.e. South Asian) to seek out means of lightening their skin to curry acceptance. In these cases, colorism appears generally interpersonal in nature. Yet, “In many parts of Asia, light skin is associated with upward mobility and higher classes. The notion is that, if you have light skin, you must be wealthy…. Dark skinned people are seen as the people work the fields” (Wakefield, 2020, paras. 17). Colorism functions and thrives both in the relationships we hold with each other, and within the social systems that directly impact the lived experience of those in the AAPI community. Affirmative action was built to counter the oppression of systemic racism and is critical to ensuring educational equity, but there are looming challenges from students, parents, and privately funded organizations.

More recently within the sphere of education, AAPI and White American students have turned their sights towards abolishing Affirmative Action policies, in favor of more colorblind policies. This move, reflected by the support of the East Coast Asian American Student Union against Harvard undergraduate admissions brought about by the Students for Fair Admissions, is a clear example of anti-Blackness within the AAPI community. Support for colorblind policies within the Asian Pacific American community are presumptive of the thought that race conscious policies within education penalize Asian and white students. Much of this support was spurred on by Thomas Espenshade and Alexandra Radford’s Princeton study. However, those who lean on this data in support of anti-affirmative action policies ignore the “legacy of antiBlackness in all American institutions, which has massively disadvantaged black communities in all areas of mobility, including education, income, and mortality” (Mayeda, 2018). Affirmative action policies are in place to directly disrupt the forces of systemic racism, which have ravaged Black and brown communities for centuries. These actions return power back to white Americans and further solidifies the barbs of systemic racism within our educational systems.

Support for eliminating race as a considering factor for the college admissions process is bound to have far sweeping effects across educational institutions, both higher education and K-12 public and private schools. This a sobering reminder that when it comes to Black issues that have manifested due to systemic racism, Black folx are tasked with solving them alone, despite the fact that they exist outside of the Black communities’ control. Furthermore, the nefarious origins of the model minority myth harm both the Asian Pacific American and Black communities, as all forms of racial oppression are bound together. “Racism against any racial minority reifies white supremacy and the marginalization of all other racial minorities” (Mayeda, 2018).

We began writing this article prior to the brutal murder of George Floyd in Minneapolis, MN. We wish we could say it was the first and last time that a Black person will be murdered by the police, but that would be a lie. The names of countless others prove this sad reality to be true – Breonna Taylor, Rem’mie Fells, Riah Milton, Tony McDade, Rayshard Brooks, Philando Castile, Tamir Rice, Michael Brown, Eric Garner, David McAtee, Sandra Bland… the list goes on for centuries, and those are only the names we know.

Allyship is a concept that has been a pillar of the social justice vernacular, but the future demands another level of action to disrupt, challenge, and dismantle systemic racism. Generally, an ally will engage in activism by standing with marginalized individuals and communities. Conversely, an accomplice focuses on “dismantling the structures that oppress that individual or group-and such work will be directed by the stakeholders in the marginalized group” (Clemens, 2017, paras. 4). To be an accomplice in the time that we find ourselves in is to be rooted in a pro-Black ideology. When we say pro-Black, we mean advocating, and if need be literally fighting for the lives of all Black people, regardless of the economic and or social markers that enforce such negative notions of the ‘exceptional negro’ or model minority. We are fighting for the equitable treatment of all Black people. As Olivia Mayeda (2018) wrote, “all forms of racial oppression are interconnected. Racism against any racial minority reifies white supremacy and the marginalization of all other racial minorities.” This brings us back to the Yolo Akili quote we began this blog post with, “Oppression thrives on isolation.  Connection is the only thing that can save you.” The Black Lives Matter movement is built on community and connection as a direct assault against white supremacy’s goal to sow descent amongst communities of color.

An accomplice is re-educating yourself and those you connect with to combat the many ways BIPOC can enact white supremacy and anti-Blackness in their communities. An accomplice is standing alongside Black folx, and if need be to shield or protect them, as they march through communities throughout America, and the world, to demand justice, equity, and the end of systemic racism and anti-Black ideologies. An accomplice is actively working to dismantle the systems of oppression that have focused on undermining Black communities, regardless of the privilege one might lose in the process. Finally, an accomplice is looking into the face of a Black person, seeing the beauty of their being, and coming to a conscious decision to protect that being, because anything less is unjust, inhumane, and a buttress of systemic racism.