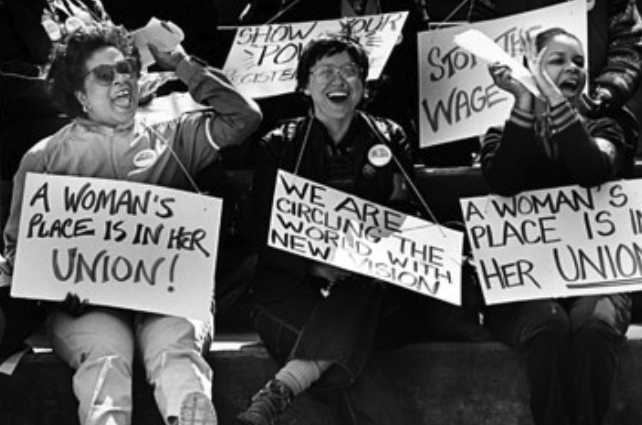 As we wrap up this Women's History month, we are watching the herculean effort of Black workers, most of which are Black women, taking on Amazon, a multi-trillion-dollar company, to unionize and become the first unionized Amazon warehouse in the nation. This effort is taking place in Bessemer, Alabama, where 80% of workers are Black, a majority are women, and more than 25% of the city lives below the poverty line. When interviewed on the issue historian, Robin D.G. Kelley shared with Democracy Now that, “This is definitely the most significant labor struggle of the 21st century, no doubt…The South has been the epicenter of the country’s most radical democratic movements, which is why it’s completely unsurprising that Bessemer, Alabama, would be the place where you’d have a renewed labor movement.” Jennifer Bates, a Black woman, mother, grandmother, and Amazon worker, in Bessemer is spearheading the union efforts, serving as the face of the BHM1's workers, and provided testimony in the United States Senate. She shared that she took the job at Amazon and, “By the third day I was hurting, and I looked around and realized it wasn’t just me. I told my sister, who also worked there at the time, and she just told me it only gets worse.”

The current unionizing is a community effort that emphasizes the intersecting lines of oppression, often experienced by working-class Black, indigenous, and other women of color (BIWOC). It reaffirmed the importance of looking at the intersections of race, gender, and labor and the integral role of BIWOC in the United States labor movement. These women teach us that BIWOC has always been the backbone of the working class and the labor movements. When working-class BIWOC tried to join existing labor organizing structures, they were denied and faced discrimination both by white men and white women-led labor organizations. When they were denied, it led to BIWOC creating their own institutions, like the National Domestic Workers Union of America, the International Ladies Garment Workers Union, the International Working Peoples Association, among many others both in the United States and along the global south. Today, Jennifer Bates joins a long line of working-class Black women and other working-class women of color who have been holding the line and leading labor efforts and the fight for labor rights. From Sylvia Woods, a New Orleans-born laundry worker-turned union activist, the Washerwomen of Jackson Mississippi, to Mexican American labor organizer, leader, and co-founder of the National Farmworkers Association, Dolores Huertas.

From the $15-hour minimum wage fight to the unionizing efforts at Amazon, it reminds us that institutional oppression has a devastating impact on working-class BIWOC, who are some of the most economically and socially marginalized. It is a reminder of the intrinsic link between white supremacy, racism, sexism, and labor exploitation. It has been working-class BIWOC in the south and across the country and the world that long held the line for labor rights. Because under capitalism, which only values capital and extraction, it is them that have often suffered the cold and egregious effects of such a dehumanizing system. Like James Baldwin said in No Name in the Street, “Well, if one really wishes to know how justice is administered in a country, one does not question the policemen, the lawyers, the judges, or the protected members of the middle class. One goes to the unprotected – those, precisely, who need the law’s protection most! – and listens to their testimony. Ask any Mexican, any Puerto Rican, any black man, any poor person – ask the wretched how they fare in the halls of justice, and then you will know, not whether or not the country is just, but whether or not it has any love for justice, or any concept of it.It is certain, in any case, that ignorance, allied with power, is the most ferocious enemy justice can have.”

Resources for continued learning and RE-Imagining:

About | And Still I Rise (and-still-i-rise.org)

Amazon’s union battle in Bessemer, Alabama is about dignity, racial justice, and the future of the American worker (brookings.edu)

Bessemer, Alabama’s union battle against Amazon is a David and Goliath tale - Vox